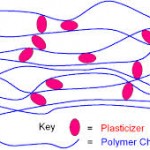 The results showed that the thermal stability of plasticized PVC blends was improved; the flame retardant performance of COPE was put into effect by promoting polymer carbonization and forming a consolidated and thick flame retardant coating.