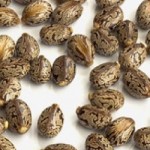 It should be noted that not the entire castor plant is poisonous; the toxin ricin is present only in castor seeds. Even the castor oil extracted from the seeds does not contain any toxin. Only the castor meal contains ricin. Once the plant is harvested and the residue cleaned up at the end of the growing season, there is no poison left out in the cultivated space; hence there is no harm in cultivating other vegetable crops in the same space where castor was cultivated.

Castor oil and meal has many benefits. Castor oil has been used as a purgative since long and still finds many advanced applications. Castor meal is now being utilized in some commercial repellent sprays for squirrels, rabbits, moles and other garden pests.